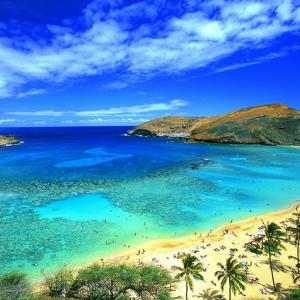 After our wedding on July 9, 2003 in Montecito, California, Inez and I decided to head further west to the big island of Hawaii for our honeymoon. After rest, relaxation and experiencing a number of tourist attractions, a good friend who lives on the island introduced us to Hale Makua, a shaman and spiritual guide to the people of the south-sea islands. He felt that Hale would be an excellent source of the history of the island.

Hale was a most unusual person. I say “was” because sadly he died a year after we met him in an automobile accident. He was born in the islands, and although he towered over my 6 foot 4 inch frame and carried at least 300 pounds of body weight, he was as gentle as a lamb. Being a U.S. citizen and at the right age in the 1960s, he was drafted into the army and served as a nurse during the Viet Nam War. He clearly had “been around the block” yet had the demeanor of a monk.

Inez and I had wonderful discussions with him and began to grasp the beautiful culture and ancestry of these islanders. One afternoon, Hale drove us up to the top of one of the local mountains where he showed us a place that is considered sacred and allegedly sits on a “vortex of spiritual energy.” I must say, although not knowledgeable about vortex energy, the feeling that Inez and I had at this sacred place was indescribably pleasant. We didn’t want to leave. But, eventually we found our way to a teahouse on the mountain and continued our discussion of the history and culture of the Hawaiian Islands. But, soon we found our discourse penetrating more and more the challenges of our modern society—climate change, energy insecurity, nuclear arms, economic chaos, social injustice, and more.

At this point, I asked Hale “Is their one thing that could happen today that would have a major positive impact on these seemingly impossible challenges.” His response was an immediate, “Yes!” “And what might that be,” I inquired with great interest. “When women have a greater leadership role in deciding our future,” was Hale’s response. “Well that’s great, Hale, but why is that the case?” He responded, “You know when children are born, all of them, male and female alike have a strong energetic normal innate connection between their heart and their brain. However, in modern society, most boys, as they mature, are taught to sever that link.”  He continued, “Men don’t cry; Men are providers and protectors of women; Men work and strive, while women mother their children, and the list goes on.” “However,” cautioned Hale, “The challenges before humanity at this point in our history require that connection between the mind and the heart. So either women must have more to say about our future, or men must learn to reestablish their heart-brain connection. And actually from a practical and non-prejudicial point of view, we need both.”

I have since thought long and hard about Hale Makua and his advice to get humanity on a new path; one that is safe, just, healthy and sustainable. And I firmly believe the key elements of Inspired Leadership are what he had in mind. An Inspired Leader provides service to all of his or her stakeholders. The key attributes of such a leader are compassion, fairness, passion, a personal dream, and the ability to communicate directly, clearly and caringly. Maybe that’s what Feminine Energy is all about.