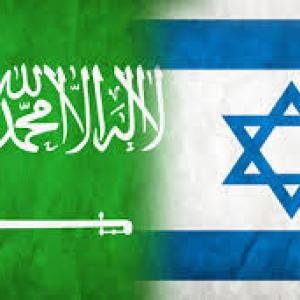 Could Israel and Saudi Arabia, two perennial adversaries, be scheming to destroy Iran’s nuclear facilities? Events over the past several months say yes, at least that’s the conclusion of analysts reporting in a recent issue of the Oil & Investment Report. I believe the arguments are quite credible.

U. S. President Obama dispatched Secretary of State John Kerry to Iran to negotiate an agreement whereby that country would forgo continued pursuit of nuclear power and the capability to produce nuclear weapons. But the current 6-month agreement is “half-baked” according to most Middle East analysts. Why?

Perhaps these points are why Saudi Arabia has recently opened up its airspace to Israeli military aircraft, dramatically shortening the flight time between Israel and Iran. This is a huge strategic advantage.  King Abdullah also reportedly has promised to provide Israel with drones, rescue helicopters, and tanker planes. Although this is not evidence of a Saudi-Israeli love affair, it means their cooperation is for real even though they have been arch enemies for more time than can be remembered

The Obama agreement is fine in the sense that it is forcing Iran to think in a direction of Middle East stabilization, but it has a long way to go. Think about this: Saudi oil fields and refineries are just an 11-minute flight from Iran; and Israel, a small country with a dense population, could be nearly annihilated with 2-3 nuclear missiles. And remember, Iran is not readily moved by western logic. Although I don’t think the probability of a preemptive nuclear strike on Israel by Iran has more than a 10% probability, that level of probability is more than enough to pull the trigger on the Saudi-Israeli strategy. When it comes to preserving their nation, Israelis have never feared world opinion and pressure; and neither have the Saudis.

What about the price of oil and its impact on the world economy? Well, that’s another story and the probable outcome is not good for anyone, except perhaps those who speculate in the energy market.